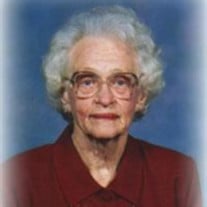 Willie Mae Mills Beaver “Tots” Fincannon, 94, of 263 Cheatham Ford Road, Hiddenite, went home to be with the Lord, Wednesday, June 11,2008, with the words “Take me home!”, at Iredell Memorial Hospital. She suffered a heart attack in her garden and was in the hospital for a month. She was born on September 21, 1913, in Alexander County, to the late Thomas Richard Mills and Martha Cecilia Price “Mattie” Mills. She was a graduate of Stony Point School and worked in the textile industry and owner of a grocery store in the west end of Taylorsville. She was an artist and at the age of 17 she professed Jesus Christ as her Savior and joined Stony Point Baptist Church. She served faithfully as a WMU Director, Sunday school teacher, Girls Auxiliary leader, organized the first Royal Ambassador program for boys, served on the Pulpit Committee and as a visitor to the homebound. Her joy was to take food to others and was generous in sharing the garden produce she loved to grow. In addition to her parents she was preceded in death by her first husband, Jack Donovan Beaver, she married in 1933 until Jack’s death in 1965, her second husband, long time family friend Harvey Fincannon who passed away in 1976; a sister, Faye Mills Sloan and a brother, Henkel Mills. She is survived by a son, Dale Beaver and wife Shelby of Mooresville; two daughters, Hilda B. Houchins and husband Bill, Judy B. Johnson and husband Steve of Hiddenite. A nephew, Joe Beaver and wife Pat of Hiddenite and a niece, Linda B. Rogers of Shelby, each came to live with her during their teen years and became her “heart” children as well. “Grandie Tots” as she is lovingly called by her family, is survived by 12 grandchildren: Chuck Houchins and wife Allison of Stony Point; Laura H. Rector and husband Dennis of Taylorsville, Pam B. Oropeza and husband Agusto, Donna B. Birch and husband Mark, Michael Beaver and wife Harriett of Mooresville, Steve Pope and wife Tina of Hiddenite, Jamie Pope and wife Christy of Statesville, Stephanie Rash and husband Paul of Stony Point, Jeff Johnson of Hawaii, Sammy Rogers and wife Angie of Shelby, Carrie Ross and husband David of Hickory, Melinda Beaver of Boulder Colorado; seventeen great grandchildren and two great-great grandchildren. Funeral services will be conducted Friday June 13, 2008, at 4:00pm at Stony point Baptist Church. The Reverends: Sidney Norton, Greg Barefoot and Phil Addison will officiate. The burial will follow in the church cemetery. The family will receive friends from 6:30pm-8:00pm on Thursday at Lindsey Hall. Memorials may be given to Stony Point Baptist Church Building Fund or Cemetery Fund, PO Box 198, Stony Point, NC 28678.

The family of Willie (Tots) Mae Mills Beaver Fincannon created this Life Tributes page to make it easy to share your memories.

Send flowers to the Fincannon family.