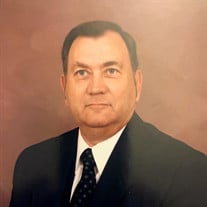 William Norris Keever, 86 of Hiddennite passed away peacefully at Trinity Ridge in Hickory, Friday December 25, 2020. Born December 22, 1934 in Alexander County, he was the son of the late Jack Keever and Beatrice Looper Keever. Norris was graduate of the University of North Carolina at Chapel Hill with a BS in Business Administration. He served in the US Navy from 1958-1961 as a commissioned officer. He was an active member of Rocky Springs United Methodist Church until his health failed, Sunday School teacher, superintendent, treasurer and chairman of the administrative board and treasurer of the church cemetery fund. He served Alexander County as a county commissioner for eight years, three years on the board of NC counties, 12 years as a member of the DSS board, six years on Alexander County Board of Elections. He retired as secretary and treasurer of Keever Heating and Cooling, managing partnering the S&N Company, active officer in Apple City Broadcasting, Inc. Those left to celebrate and cherish his memory of Norris are his wife of 62 years, Sara (Hannah) Keever, three nieces, Lisa McLain, Amy Deal, Holly Cheney, two nephews, Joel Keever and Jeffery Keever. In addition to his parents, three brothers, George Keever, Bobby Keever and James Alan Keever preceded him in death. A graveside service for Norris will be conducted Sunday Decemeber 27, 2020 at Rocky Springs UMC with Pastor Justin Douglas and Rev. Bob Herron officiating. Military Rites will be provided by Alexander County Honor Guard. The service will be private due to the Covid 19 virus. Services have been entrusted to Chapman Funeral Home in Stony Point.

William Norris Keever, 86 of Hiddennite passed away peacefully at Trinity Ridge in Hickory, Friday December 25, 2020. Born December 22, 1934 in Alexander County, he was the son of the late Jack Keever and Beatrice Looper Keever. Norris was graduate... View Obituary & Service Information

The family of William Norris Keever created this Life Tributes page to make it easy to share your memories.

Send flowers to the Keever family.