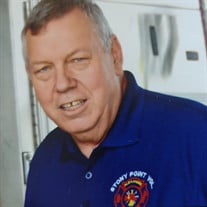 Steven Edward Lackey, 71, “Steve,” went home to be with Jesus on January 20, 2022, after a long illness. Steve was born in 1950 to Dugan and Betty Lackey. He went to technical school in Nashville, Tennessee. After he received his certification, he started a long career as a mechanic. He married Shirley Stout in 1973, and they raised three daughters, Cristi, Bethany, and Amy. Steve retired from Freightliner in 2015. Steve was a long-time member of Stony Point Baptist Church and chief of the Stony Point Volunteer Fire Department. But he was so much more than this brief list can say. He was a brave man, who taught three daughters how to drive a stick shift and change oil. He was a tinkerer, who was always fixing something. He was a collector of old and broken things, because he looked at them and saw what they could be. He was a disheveled Christmas morning assembler of toys that became increasingly complicated as his daughters grew up. He was a reliable baritone/ bass singer, who could occasionally be persuaded to take on a solo (since his wife was the director). He was an amateur soundman, who raced to the sound booth at the slightest sound of a buzz or squawk in the sound system. He was technical support, set-up and breakdown crew, and stagehand for various iterations of The One-Way Singers and the SPBC Ensemble. He once fixed a broken-down school bus taking the youth group to camp on the side of a busy interstate with chewing gum. Just don’t ask him to deal with snakes Steve was very active in the Baptist Men and the Brotherhood at church as they organized mission trips to help people who had been displaced from their homes by disasters. He was a friend to so many on these trips. Doing this mission work, he became a collector of stories, a quiet man who loved to talk to people. He was an advocate for always seeking to do more for those in our world who were less fortunate. He was a man who was unafraid to get choked up speaking about his mission experiences in a church conference. Most of all, whether he was being a church member, a fire chief, a husband, a father, a mechanic, he was dedicated to doing his best for others and glorifying God through his life. Steve was preceded in death by his father, Edward “Dugan” Lackey. He is survived by his mother, Betty Lou (Milholland) Lackey, of Stony Point, his loving wife, Shirley (Stout) Lackey of the home, his daughters, Cristi (Joe) Julsrud of Stony Point, Bethany Lackey of Jacksonville, and Amy Lackey of Asheville, his grandson, Ian Julsrud of Stony Point, his brother, Craig (Donna) Lackey of Conover, and sister Pamela (Charlie) Boatright of Durham. Steve’s life will be celebrated on Sunday, January 23, at Stony Point Baptist Church. The family will receive friends from 3-4 pm in the sanctuary, and the service will follow at 4 pm. Reverend Phil Addison and Reverend Rick Norman will conduct the service. Pallbearers include Joel Sigmon, Aaron Burke, James Brian Abernathy, Jacob Abernathy, Colby Cockrell, and Parker Downs. Honorary pallbearers are Felix Webster and Don Harrington. In lieu of flowers, memorials may be directed to Stony Point Baptist Church, PO Box 198, Stony Point, NC, 28678. Chapman funeral Home is serving the Steve Lackey family.

Steven Edward Lackey, 71, &#8220;Steve,&#8221; went home to be with Jesus on January 20, 2022, after a long illness. Steve was born in 1950 to Dugan and Betty Lackey. He went to technical school in Nashville, Tennessee. After he received his... View Obituary & Service Information

The family of Steven Edward Lackey created this Life Tributes page to make it easy to share your memories.