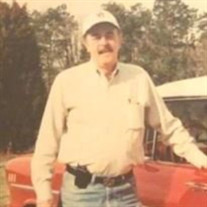 Steve met Jesus His Savior Sunday, Sept. 12, 2021. He was born July 17, 1942, in Monroe, Mich., to the Rev. Crystle Henry (C.H.) Riddle and Elizabeth Dekalaita Riddle. He was proud of his heritage. His grandmother, Dorica Sumac and grandfather,... View Obituary & Service Information

The family of Steve Crystle Riddle created this Life Tributes page to make it easy to share your memories.

Send flowers to the Riddle family.