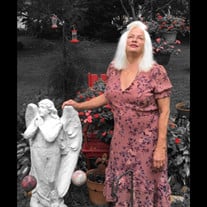 Shirley ( Button) Levan, 66 , of Hiddenite, earned her angel wings on Monday, July 26, 2021. Button retired from CommScope after 25 years of service. She was a loving wife, mother, and grandmother. Button was the first woman in Alexander County... View Obituary & Service Information

The family of Shirley Button Levan created this Life Tributes page to make it easy to share your memories.

Send flowers to the Levan family.