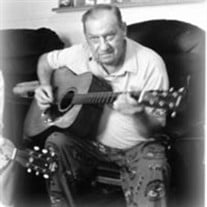 Samuel Hall Wiles, 77, of 18 Samilyn Lane, Stony Point, passed away Monday, Mar. 31, 2008, at his home, after a long illness with cancer. He was born on Sept. 9, 1930, in Alexander County, to the late Johnny Wiles and Pearl Munday Wiles. Sam enjoyed playing his guitar, singing and writing his own gospel songs. Working in his garden, canning, so he could give most of it away. This was a real pleasure to him. He was a retired construction worker, served in the US Army during the Korean Conflict and was of the Baptist faith.Sam formerly lived in Florida and moved back about 10 years ago to be near his children and family. In addition to her parents he was preceded in death by one great grandson, Sammy Lee Kiser; one son, Robert Lee Wiles Sr.; Five sisters: an infant Shirley Jean Wiles, Annie Gilreath, Lorene Payne, Edith West and Mary Ann Mitchell; four brothers: Ralph Munday, Bob Wiles, Emerson Wiles and Presley Wiles. He is survived by three daughters: Shirley Kiser and husband Sammy of Taylorsville, Connie Stillwell, Martha Norton and husband Howard all of Stony Point; one son Ricky Wiles of Taylorsville; one daughter-in-law Pam Wiles; Five grandchildren: Garland Ramsey, Jeffrey Kiser, Hope Johnson, Michelle Hardin, Robert Lee Wiles, Jr.; four great grandchildren: Samilyn, Gracie, Caleb, and William, and two on the way. He was very happy about that. One sister Geraldine Treadway and husband Roy of Taylorsville. Geraldine was wonderful and helpful. Funeral services will be conducted Friday at 3:00pm at Linney’s Grove Baptist Church. Pastor Sammy Kiser will be officiating. The body will lie in state 30 minutes prior to the funeral hour. Burial will follow in the church cemetery. Military Rites will be provided by Hiddenite Post #10,000 and Taylorsville Post #5466. The family will receive friends at Chapman Funeral Home Thursday evening from 6:00pm-8:00pm and at other times will assemble at the home. Memorials may be given to Hospice of Iredell County, 2347 Simonton Road, Statesville, NC 28625 The family of Sam would like to thank everyone for the food, prayers, and visits. Special thanks to Hospice of Iredell County, and to two special ladies for all they have done and special friendship to Sam: Lillie George and Katherine Blankenship.

Samuel Hall Wiles, 77, of 18 Samilyn Lane, Stony Point, passed away Monday, Mar. 31, 2008, at his home, after a long illness with cancer. He was born on Sept. 9, 1930, in Alexander County, to the late Johnny Wiles and Pearl Munday Wiles.... View Obituary & Service Information

The family of Samuel Hall Wiles created this Life Tributes page to make it easy to share your memories.

Send flowers to the Wiles family.