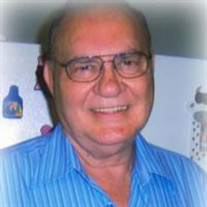 Roy Lee Murdock, 68, of 251 Lodge Hall Court , Stony Point , went home to be with the Lord on Thursday August 28, 2008 at Gordon Hospice House. He was born on April, 29, 1940, in Iredell County, to the late Joe Murdock and Ruby Moose Murdock He attended Iredell county schools and was a retired welder from BetCo and was also a devoted member of Stony Point Tabernacle Church. Mr. Murdock fought a courageous battle with cancer for almost two years. In addition to his parents he was preceded in death by two brothers, Buddy Murdock and James Nance, and one sister Joyce Henderson. Left to cherish his memory is his devoted wife, Elizite DeSoto Murdock whom he married on July 16, 2005; one daughter, Patricia Hendricks and husband Martin; two granddaughters, Wendy Hendricks and Talia Hendricks; one great grandson, Elijah Weiss, all of Stony Point; one brother, Tony Nance of Statesville; two very special friends, George and Emma Martin. The family would like to say a special thank you to the Hospice and Palliative Care of Iredell County and to the Gordon Hospice house for all their support and dedication they had shown to the family and Mr. Murdock. Also, the family would like to thank all the many loyal friends from Stony Point Tabernacle church. Funeral services will be conducted at 2pm on Sunday August 31, 2008 at Stony Point Tabernacle. The body will lie in state thirty minutes prior to the funeral hour. Rev. Wesley Hammer will officiate. Burial will follow in the church cemetery. The family will receive friends Saturday 7-8:30pm at Chapman Funeral Home and at other times will assemble at the home of his daughter Patricia Hendricks, 346 New Sterling Road, Stony Point. Pallbearers include: Conley James, Randy Barnes, Andy Lackey, Darrell Robinette, Donny Sherrill, Dale Alan, Robert McClain, Joey Cothren, Memorials may be made to the Stony Point Tabernacle Church, PO Box 740, Stony Point, NC 28678 or to Hospice of Iredell County, 2347 Simonton Road, Statesville, NC 28625.

Roy Lee Murdock, 68, of 251 Lodge Hall Court , Stony Point , went home to be with the Lord on Thursday August 28, 2008 at Gordon Hospice House. He was born on April, 29, 1940, in Iredell County, to the late Joe Murdock and Ruby Moose Murdock... View Obituary & Service Information

The family of Roy Lee Murdock created this Life Tributes page to make it easy to share your memories.

Send flowers to the Murdock family.