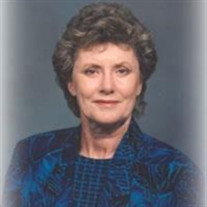 Robbie Sims Crouch, 71, of Lawzyday Farm Drive, Hiddenite, passed away Thursday morning, May 22, 2008, at her home after battling cancer for over 22 years. She was born on October 31, 1936, in Conway, Arkansas, to the late Oscar Thomas Sims and Ola Terrell Sims. She owned and operated Stony Point Oil along with her husband. After retiring, Mrs. Crouch and her husband opened Lawzyday Farm, an exotic animal park which specialized in educational hands-on activities for school children. In addition to her extensive knowledge of animal care, she was also known for her talents as an accomplished seamstress and cook. She was an active member of the community, contributing her many talents to various community organizations including Stony Point Fire Department and also to Stony Point United Methodist Church where she was a member. In addition to her parents she was preceded in death by a brother, Thomas Owen Sims. She is survived by her husband, Carlton L Crouch of the home; one son, Thomas Carlton Crouch of the home; one daughter, Sherry Crouch Ashley and husband Gary of Hiddenite; two grandchildren, Matthew “Sparky” Williams and Hollie Williams, both of Hiddenite; A very special niece, Dana Robertson and husband Darrell of Stony Point and two very special grand nieces Elisabeth Turner and husband Ron of Granite Falls and Kristi Robertson of Hickory. Funeral services will be conducted at Stony Point Methodist Church on Sunday May 25, 2008 at 3:00pm. Rev. Deval Mason will officiate. The family will receive friends at the church from 2:00pm-3:00pm prior to the funeral. Memorials may be given to Stony Point United Methodist Church, PO Box 120, Stony Point, NC 28678; The American Cancer Society, PO Box 22718, Oklahoma City, OK 73123-1718 or Hospice of Alexander County, 50 Lucy Lane, Taylorsville, NC 28681.

Robbie Sims Crouch, 71, of Lawzyday Farm Drive, Hiddenite, passed away Thursday morning, May 22, 2008, at her home after battling cancer for over 22 years. She was born on October 31, 1936, in Conway, Arkansas, to the late Oscar Thomas Sims... View Obituary & Service Information

The family of Robbie Sims Crouch created this Life Tributes page to make it easy to share your memories.

Send flowers to the Crouch family.