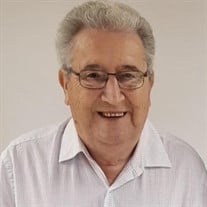 Ralph G Dancy, 80 of Statesville passed away Thursday, November 12, 2020 at Iredell Memorial Hospital after an extended illness. He was born Tuesday, October 15, 1940 in Wilkes County to the late Emanuel “Bud” Dancy and Nanny Brown Dancy. He was a member of Gethsemane Baptist Church in Olin, NC. In addition to his parents Ralph was preceded in death by one brother, Jack Dancy, and two sisters, Hazel Combs and Marie Huffman. Ralph is survived by his wife of 60 years, Ruth Staley Dancy of the home, two daughters, Sherry Chapman and husband Billy, and Cindy Dellinger and husband Jeff, all of Statesville, one brother, Vernon Dancy of Millers Creek, four grandchildren, Dr. Stephanie Chapman of Wilmington, Carrie McCrary of Elkin, Shannon Dellinger, and Aaron Chapman, both of Statesville, two great grandchildren, Brayden and Sage, and a number of nieces, nephews, and special friends. A Memorial Service will be conducted 1:00 pm Saturday, November 21st, 2020 at Gethsemane Baptist Church. Rev. Tom Blackburn will officiate. There will be no formal visitation.

The family of Ralph G Dancy created this Life Tributes page to make it easy to share your memories.

Send flowers to the Dancy family.