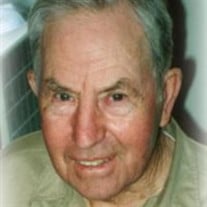 Mr. Oren Lee Stout, 86, of Stony Point, passed away at his home on Wednesday, December 16, 2009. He was the son of Noah Preston Stout, and Laura Docia Rhyne Stout, and was born on March 11, 1923, in the same home he lived all of his life, and then died in. He was the successor of his father to operate the 107 year old Mountain View Farm, 281 Harris Bridge Road, Stony Point, and farmed his entire life. As the youngest son of a farming family, he was not able to enlist in service during World War II, but kept the farm running to support the war effort. Mr. Stout was a respected member of the agricultural community, having operated a dairy farm all his life, and made many improvements to improve the productivity of the farm, including being the first Iredell dairy to participate in embryo transplant as a herd improvement endeavor. In 1992 he was chosen as Iredell County Farmer of the Year. He was active in the Woodmen of the World and the Grange, and served as a leader in the Scotts Community Grange. He served on the Iredell County Farm Bureau Board of Directors for many years. He was a 4-H leader for the Scotts club, and assisted in the involvement of his children and grandchildren, and many community children. He was a life-long member of Stony Point Baptist Church and was a Trustee, a Sunday School teacher, a deacon, and sang in the choir. He loved gospel and bluegrass music, and played as long as he was able. In the early years of WSIC Radio, Mr. Stout and a group of local friends, known as the “Piedmont Entertainers”, played the first live Saturday morning radio show that featured them. He also earned his private pilot’s license, and flew for his enjoyment and satisfaction. His leadership and love for agriculture was an inspiration to his family, resulting in his children and grandchildren following in the industry, agriculture education, and related agricultural and animal science fields. He loved to travel, taking his family to a majority of the 50 states, and he and Mrs. Stout traveled abroad on agricultural tours. To see agriculture endeavors across the country were of particular interest to him, and as an avid photographer, he captured it all on film. He visited every state and national park that his travels afforded him. Mr. Stout enjoyed hunting and fishing, and made several trips to hunt in the western part of the U.S. He was preceded in death by his parents, a sister, Clara Stout Boyette and husband Joe, of Clinton , NC , and three brothers, James Floyd Stout and wife Jessie, and Ray Donald Stout and wife Mary Frances of Salisbury, NC , and Flake Rhyne Stout of the home. He is survived by his wife, Grace Oliver Stout, of the home, whom he married January 2, 1948, a stepson, Stephen Dale Lackey and wife Sherry of Statesville, daughters Shirley Stout Lackey and husband Steve, Allison Stout Houchins and husband Chuck, Melanie Stout Passmore and husband Jack, and a son, Wayne Preston Stout, all of Mountain View Farm. He is survived by grandchildren Kim Lackey Johns, Kellye Lackey, Cristi Lackey Julsrud and husband Joe, Bethany Lackey, Amy Lackey, Brenna Houchins Pence and husband Matthew, Daphne Houchins, Elissa Houchins, Alan Coley, Joe Passmore, Monica Passmore McLear, and a special family friend, Ms. Donna Johnson, and caregiver Patti Welborn. Greatt-grandchildren include Weylin Johns and Ian Julsrud and five step great-grandchildren, Heaven, Holly, and Lucas McLear, and Dustin and Kirsten Passmore. Funeral services for Mr. Stout will be held Sunday, December 20 at 3:30 at Stony Point Baptist Church , with the receiving from 1:00 until 3:00 prior to the service. Rev. Phil Addison will officiate. Burial will follow in the church cemetery. Pallbearers for Mr. Stout include: Mack Oliver, Benny Johnson, Brownie Rufty, Randy Clanton, Herman Estes, and Lynn Kerr, with honorary pallbearers being Gary Cornelius, Dr. Jim Rogers, Dr. Larry Watts, and Fred Ballard.

Mr. Oren Lee Stout, 86, of Stony Point, passed away at his home on Wednesday, December 16, 2009. He was the son of Noah Preston Stout, and Laura Docia Rhyne Stout, and was born on March 11, 1923, in the same home he lived all of his life, and... View Obituary & Service Information

The family of Mr. Oren Lee Stout created this Life Tributes page to make it easy to share your memories.

Send flowers to the Stout family.