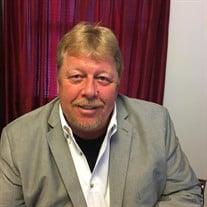 Murray C Walker, age 59 of Stony Point, was set free from his earthly body and walked through the gates of heaven on Thursday, September 3rd, 2020. He was an unforgettable man, and will be dearly missed by many. Murray was born on April 24th, 1961 in Iredell County to the late Marvin Coolidge Walker and Elizabeth Haire Walker, and grew up in the Cool Springs community. He is survived by the love of his life, Brenda Price Walker of Stony Point; daughters Melissa (Kenny) Pierce of Stony Point, Wendy Doric of Troutman; seven grandchildren, Kennedy Doric, Collin Doric, Reagan Pierce, Colton Pierce, Logan Woodle, Kirsten Pierce, and Ethan (Arie) Pierce, and 1 great-grandson Oliver Pierce. He also leaves behind his faithful companion, Bo Duke. Also left to cherish his memory are a brother Maston (Pam) Walker of Statesville, sisters Marsha (Mike) Furr of Charlotte, Melinda (Linwood) Thurlow of Statesville, Mindy Campbell of Statesville, Melda (Jimmy) Goodin of Statesville, and numerous special nieces and nephews. Murray valued family and loved to throw a good party. Murray lived life to the fullest, and enjoyed traveling the country, riding his Harley Davidson motorcycle, playing cards (Rook and Poker), flying hot-air balloons, collecting antiques, and enjoying a good meal with family and friends. He never met a stranger, had a gift for making everyone feel special, and has developed friendships all over the country. Though a salesman by trade, Murray’s passion in life was to recognize the sacrifices and contributions of utility linemen, and to collect artifacts that preserve the history of the industry. He helped found the International Lineman’s Museum and Hall of Fame, and served on it’s board of directors for many years. Murray also worked with colleges that train linemen to help promote safety in the industry, and saw linemen as underappreciated, unsung heroes. A Celebration of Life service will be held 2:00 pm on Tuesday, September 8th at New Life Church in Taylorsville, NC, with Pastor Steve Watson officiating. The family will receive friends 12:00 pm to 2:00 pm. Burial will follow at Iredell Memorial Gardens in Statesville, NC. In lieu of flowers, the family would be honored if you would consider making a donation in Murray’s memory to the International Lineman’s Museum at www.linemanmuseum.org to help continue his work, or to Gordon Hospice House in Statesville, whose amazing staff provided extraordinary care to Murray in his final days.

Murray C Walker, age 59 of Stony Point, was set free from his earthly body and walked through the gates of heaven on Thursday, September 3rd, 2020. He was an unforgettable man, and will be dearly missed by many. Murray was born on April 24th,... View Obituary & Service Information

The family of Murray C Walker created this Life Tributes page to make it easy to share your memories.

Murray C Walker, age 59 of Stony Point, was set free from his...

Send flowers to the Walker family.