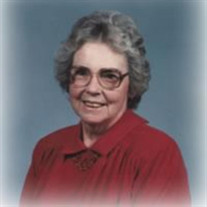 Martha Virginia Rufty Stikeleather, 87, of Harris Bridge Road, Stony Point, died Wednesday (July 1, 2009) at Autumn Care of Statesville, following a lengthy illness. Mrs. Stikeleather was born on May 7, 1922, in Stony Point to the late Joseph Washington Rufty and Lelia Elizabeth Bruce Rufty. A graduate of Central High School, she was a life-long resident of Iredell County. She was a homemaker and devoted wife and mother to her family. She loved working in her garden and enjoyed the wildlife and birds which were abundant on the family farm. On Aug. 9, 1941, she married William Mack “Chal” Stikeleather Jr., who preceded her in death. She was also predeceased by three brothers, Walter Edward Rufty, Albert Allen Rufty and Joseph “Judd” Bruce Rufty. She is survived by one son, Dr. Jim Stikeleather and his wife, Melissa, of Chapel Hill; three daughters, Dare Stikeleather Ballard and her husband, Garry, of Mooresville; Anita Stikeleather Murdock and her husband, Dennis, of Mooresville; and Emily Stikeleather Baker and her husband, Bill, of Statesville; five grandchildren, Ben Stikeleather and his wife, Betsy, of Durham; Dennis Murdock Jr. of Stony Point; David Murdock and his wife, Melanie, of Charlotte; Katie Baker Collins and her husband, Parks, of Statesville; Liz Baker of Raleigh; and three great-grandchildren, Claudia and Carter Stikeleather of Durham, and Baker Collins of Statesville. She is also survived by one sister, Alma Rufty Millsaps of Stony Point. Funeral services will be conducted at 3 p.m. Monday (July 6) at Concord Presbyterian Church in Loray, where Mrs. Stikeleather was a member of the Stikeleather-Stevenson Sunday School Class. Rev. Kyle Goodman will officiate, and burial will follow in the church cemetery. The family will receive friends from 1:30 to 2:30 p.m Monday in the church fellowship hall. Pallbearers will be: Jackie Millsaps, Tony Wilson, Randy Dellinger, Grant Miller, Frank Setzer, and Paul Stikeleather. Honorary pallbearers will be members of the Stikeleather-Stevenson Sunday School Class at Concord Presbyterian Church. In lieu of flowers, memorials may be given to the building fund of Concord Presbyterian Church, 3867 Taylorsville Hwy., Statesville, NC 28625, or the Hospice & Pallative Care of Iredell County, 2347 Simonton Road, Statesville, NC 28625. The family wishes to thank the staffs of Autumn Care and Hospice for the loving care provided to Mrs. Stikeleather during her illness.

The family of Martha Virginia Rufty Stikeleather created this Life Tributes page to make it easy to share your memories.

Send flowers to the Stikeleather family.