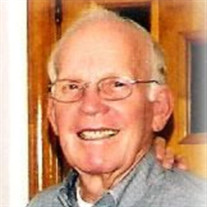 Linzey Bowman, age 76 of 5675 Church Rd., Taylorsville, passed away Thursday December 16, 2010 at Catawba Valley Medical Center, after an extended illness. He was born July 1, 1934 in Alexander County to the late Pete Bowman and Lottie B. Bowman. Mr. Bowman served in the US Army during the Korean War. He worked as a Furniture upholsterer and also was a cattle farmer. He was also a member of Friendship Lutheran Church where he was a Sunday School Teacher and served on the church council. In addition to his parents he was preceded in death by one daughter, Sherry Bowman; one sister, Pauline Richey; and one brother in law, Harold Frye. He is survived by his wife, Doris Hefner Bowman of the home; two daughters, Shelly Chapman and husband Mick, Mitzi Powell and husband Holt both of Taylorsville; two brothers, Ted Bowman and wife Glenda, Wayne Bowman and wife Nancy both of Bethlehem; two sisters, LouAnn Frye, Glenda Sipe and husband Conley both of Taylorsville; one brother in law, Arnold Richey of Bethlehem; one granddaughter, Candy Lewis and husband Charlie; and one great grandson, Logan Sprinkle all of Virginia Beach, VA. A memorial service will be conducted at 3:00pm Tuesday December 21, 2010 at Friendship Lutheran Church. Rev. Todd Rauscher and Rev. Phil Thorsen will officiate. Burial will follow in the church cemetery. Military rites will be provided by VFW Post #10000 and Post #5466. The family will receive friends from 1:30-2:45pm Tuesday prior to the service at the church. Memorials may be given to the Family Life Center at Friendship Lutheran Church, 5300 Church Rd., Taylorsville, NC 28681.

Linzey Bowman, age 76 of 5675 Church Rd., Taylorsville, passed away Thursday December 16, 2010 at Catawba Valley Medical Center, after an extended illness. He was born July 1, 1934 in Alexander County to the late Pete Bowman and Lottie B. Bowman.... View Obituary & Service Information

The family of Linzey Bowman created this Life Tributes page to make it easy to share your memories.

Send flowers to the Bowman family.