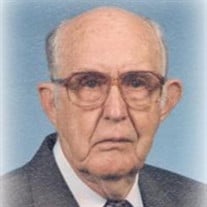 Kermit Eugene Templeton, age 90 of 3424 Hickory Hwy., Statesville, passed away Sunday November 7, 2010 at Iredell Memorial Hospital. He was born March 30, 1920 in Iredell County to the late Jonah Wilson Templeton and Dessie Mayberry Templeton. He served in the U.S. Armed Services during World War II in the 63 rd Division 253 rd Infantry. He fought in the Battle of the Bulge. While in the service, his skills in carpentry were noted as he was called upon to build sets for the USO. He retired as superintendent from Builtright Chair Company where he was a master craftsman. He was a member of Beulah Baptist Church where he served as the Adult Men’s Sunday School Class teacher for several years. In addition to his parents, Mr. Templeton was preceded in death by one sister, Hazel T. Morrow and one brother Foy L. Templeton, Sr. He is survived by his wife of 61 years, the former Katherine Morrow of the home; two sons, Jeffrey A. Templeton of Statesville and Barry E. Templeton and wife, Yvonne of New Bern; four granddaughters, Brandy Templeton of Newton, Whitney Templeton of New Bern, Caitlin Templeton of Jacksonville, and Anna Templeton of New Bern; three great-granddaughters, Isabella Templeton, Maddie Templeton, and Alaira Templeton; two sisters, Rachel T. York and Phyllis T. Feimster and husband Frank; and one brother, J.W. Templeton and wife Nancy all of Statesville. Visitation will be held from 12:00-1:30pm Wednesday, November 10, 2010 in the fellowship hall of Beulah Baptist Church with a service of celebration at 2:00 p.m. in the church sanctuary with Reverend Daniel Harmon, Reverend Henry Cook, and Reverend Robert Garrett officiating. Burial will follow in the church cemetery with full military rites being provided by the Iredell Veterans Council. In lieu of flowers, memorials may be made to the Building Fund of Beulah Baptist Church, 1851 Old Mountain Road, Statesville, NC, 28677.

The family of Kermit Eugene Templeton created this Life Tributes page to make it easy to share your memories.

Send flowers to the Templeton family.