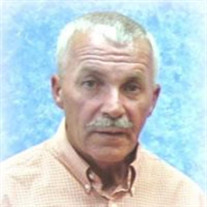 Johnny Allen Campbell 56, of 96 Jackson Lane, Stony Point, passed away unexpectedly Tuesday February 17, 2009 at Carolina Medical Center. He was born August 30, 1952 in Iredell County to the late Howard “Junior” Campbell and Mary Fulbright Campbell. He worked at Broyhill Furniture for years and was a member of Stony Point Baptist Church. He enjoyed hunting; and as a coach, umpire, referee and spectator, he enjoyed his sports. In addition to his parents he was preceded in death by a daughter, Julia Deal; one brother, Tommy Lee Campbell; and a brother in law, Billy Lee James. Johnny is survived by his wife, Kathy Heafner Campbell of the home; one son, Israel Campbell of the home; one daughter, Betsy Campbell of Stony Point; one sister, Denise James of Hiddenite; his grandchildren: Zachary Deal, Isaiah Campbell, Jacob Campbell, Elijah Campbell, and Thomas Campbell all of the home and who adored their PaPaw very dearly; a sister in law, Ellen Campbell; also a great number of brothers in law and sisters in law; a great number of nephews and nieces; and he was also survived by many, many family and friends. Funeral services will be conducted 4:00pm Friday February 20, 2009 at Stony Point Baptist Church. Rev. Phil Addison, Rev. Henry Cook and Rev. Andrew Miller will be officiating. Burial will follow in the church cemetery. The family will receive friends Friday, February 20, 2009 from 1:00pm – 3:30pm at the church and other times at the home. Memorials may be given to Israel Campbell Fund c/o Stony Point Baptist, Church PO Box 198, Stony Point, NC 28678.

The family of Johnny Allen Campbell created this Life Tributes page to make it easy to share your memories.

Send flowers to the Campbell family.