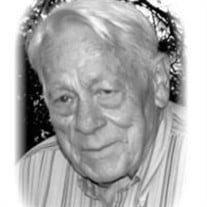 John Hulette Norton, 86, of Stony Point, passed away Sunday, April 13, 2008, at Davis Regional Medical Center. He was born on April 5, 1922, in Alexander County, to the late William Stamey Norton and Cora Burgess Norton. He worked for the United... View Obituary & Service Information

The family of John Hulette Norton created this Life Tributes page to make it easy to share your memories.

Send flowers to the Norton family.