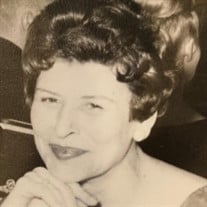 Janette Proctor Crouch, 93 of Statesville passed away Thursday, November 19, 2020 at Iredell Memorial Hospital following a brief illness. She was born Thursday, July 7, 1927 in Waycross, GA to the late James Washington Proctor and Sarah Elizabeth McFoy. After she was born in Waycross, her family moved to Valdosta, GA. She grew up there and was a graduate of Valdosta High School. She married the love of her life the late Lt. Col. Ben Frank Crouch on September 1, 1954 in Valdosta, GA. Janette will be fondly remembered by her family as a loving wife, mother and grandmother. She was quite the homemaker as she loved to cook, sew and spend time with her family. Some of her favorite pastimes were reading and playing Bridge. When Ben was in the US Air Force, they were active in the Officers Club and enjoyed the entertainment and fellowship it provided. In addition to her parents and husband, Janette was preceded in death by her son, Terry Penn, and her sister, Bettye Proctor. Janette is survived by two sons, Scott Thomas Crouch (Denise) of Maiden, and Casey Vincent Crouch (Tracy) of Cornelius, one granddaughter, Jennifer Crouch Elliott (Nash) of Estill, SC and two great grandchildren, Richard Hepburn Elliott III and Carrington Blair Elliott. A private graveside service will be conducted at New Salem Presbyterian Church. The Rev. Brad Mullis will officiate. Memorials may be made to Hospice and Palliative Care of Iredell County.

The family of Janette Proctor Crouch created this Life Tributes page to make it easy to share your memories.

Send flowers to the Crouch family.