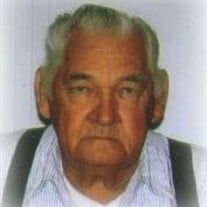 James Wilford “Jim” Cash age 75 of 151 Kenway Drive, Woodleaf, passed away Tuesday June 9, 2009 at his home. He was born on January 26, 1934 in Iredell County, to the late Gales Wilford Cash and Hollie Lee Dowdy Cash. He was a retired truck driver and enjoyed gardening. He was also a member of Mt Herman Lutheran Church. He is survived by his sons, David Cash of Tucson, AZ, Tim Starnes of Richmond, VA; one daughter, Roxanne Wood of Statesville; one brother, Troy Cash of Statesville; and one sister, Evelyn Fulbright of Statesville; seven grandchildren: Jimmy, Nicole, Heather, William, Jerica, Shane, and Savannah; one great grandchild, James Jones. In addition to his parents, he was preceded in death by his wife, Marie Stegall Starnes Cash; one sister, Pauline Southerland; one infant son, Randall Cash. Funeral services will be conducted at 2:00pm on Saturday June 13, 2009 at the Mt Herman Lutheran Church. Rev Gene Bruce will be officiating. Burial will follow in the church cemetery. The family will receive friends from 1:00-2:00pm at the church prior to the funeral service. In lieu of flowers memorials may be made to Mt Herman Lutheran Church Building Fund, 110 Mt Herman Road, Statesville, NC 28625.

The family of James (Jim) Wilford Cash created this Life Tributes page to make it easy to share your memories.

Send flowers to the Cash family.