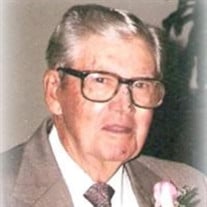 Jacob Moser “J.M.” Lackey, 93, of 3424 Old Mountain Road, Hiddenite, passed away Friday, June 19, 2009 at his home. He was born March 29, 1916 in Alexander County to the late Chalmers Alexander Lackey and Pearl Price Lackey. He served in the United States Army during WWII in Europe. He was a farmer and fertilize dealer. J.M. was a member and an elder of New Salem Presbyterian Church. He was also a member of VFW post 10,000 and the American Legion. J.M. was on the Board of Directors of Energy United Water Corp., Board of the Railroad Commission and the NC Board of Health. He was Chairman of Alexander County Democrat party for fourteen years, Chairman of the New Salem Child Enrichment Program; he believed in community service and helped establish the Hospice of Alexander County. J.M. and wife Hazel was awarded Couple of the Year in 1958 by Hiddenite and Stony Point North Carolina Grange. He was the Chamber of Commerce’s citizen of the year in 1989, Alexander County farmer of the year in 2009, and a former Alexander County Commissioner. In addition to his parents he was preceded in death by two sisters, Arcola Lackey Lutz and Modean Lackey Lackey. He is survived by his wife of sixty seven years, Hazel Barnes Lackey; two daughters, Lynne Lackey Hood and husband George of Athens, GA, Joy Lackey Sink and husband Ronnie of Winston Salem; one sister, Helen Hunter of Stony Point; grandchildren, Scott “JD” Sink and wife Debbie of Hiddenite, Sissy Rausch and husband Todd of Winston Salem, Katie Hood of Athens GA; great grandchildren, Risa Sink, Kyle Sink, Austin Sink, Mason Sink, Riley Rausch and Tyler Rausch. Funeral services will be conducted at 10:00am Monday, June 22, 2009 at New Salem Presbyterian Church. Rev. Walter Fleming and George Holleman will be officiating. Burial will follow in the church cemetery. Military rites will be provided by VFW Hiddenite Post # 10,000 and VFW Taylorsville Post # 5466. The family will receive friends Sunday June 21, 2009 from 6:00-8:00pm at Chapman Funeral Home. Memorials may be given to Hospice of Alexander County 50 Lucy Echerd Lane, Taylorsville, NC 28681 or Hospice of Catawba 3975 Robinson Road, Newton, NC 28658.

The family of James (J.M.) Moser Lackey created this Life Tributes page to make it easy to share your memories.