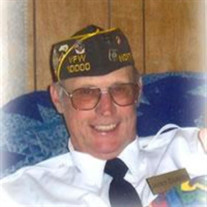 James B. Dugger, 72, of 452 County Line Road, Stony Point, our beloved husband and Father was called to be with his Savior on Monday, May 19, 2008, at Davis Regional Medical Center, after being in declining health for 2 years. He was born on October 5, 1935, in Carter County, TN, to the late Lemuel Dugger and Bessie Miller Dugger. He was a retired carpenter and an ordained Baptist minister. He served in the United States Army Medical Corp, during the Korean War. He was also a member of the VFW Post 10,000 Hiddenite and American Legion Post of Stony Point. In addition to his parents he was preceded in death by a son Jimmy Lynn Dugger, and a daughter Bessie Marie Martin; three brothers, Darrell Dugger, Bob Dugger and Roy Dugger. He is survived by his wife, Kathy Cuccia Dugger of the home; two sons: David Boyd Dugger and wife Barbara of Bulls Gap, TN, Stevie Dale Dugger of Rogersville, TN; four daughters: Tammy York and husband Melvin of Stony Point, Patti Foster and Randall Shumaker of Taylorsville, Jona Morrison and husband Todd of Hiddenite, Shannon Neal and husband Tom of Statesville; two brothers, Gary Dugger and Shelton Dugger of Roan Mountain, TN; three sisters, Tina Hughes and Joyce Wheeler of Black Mountain, NC and Ruby Taft of Canton, OH; seventeen grandchildren, nine great grandchildren. Funeral services will be conducted at Chapman Funeral Home Chapel, Thursday at 1:00pm. Rev. Herb Kelso will be officiating. The body will lie in state sixty minutes prior to the funeral hour. Burial will follow at the Stony Point Cemetery. Military Rites will be provided by VFW Hiddenite Post #10,000 and VFW Taylorsville Post #5466. The family will receive friends Wednesday evening from 6:30pm-8:30pm at Chapman Funeral Home and at other times at the home. Memorials may be given to Alexander County Rescue Squad, PO Box 938, Taylorsville, NC 28681 or Iredell County Hospice, 2347 Simonton Rd, Statesville , NC 28625.

James B. Dugger, 72, of 452 County Line Road, Stony Point, our beloved husband and Father was called to be with his Savior on Monday, May 19, 2008, at Davis Regional Medical Center, after being in declining health for 2 years. He was born on... View Obituary & Service Information

The family of James B. Dugger created this Life Tributes page to make it easy to share your memories.

Send flowers to the Dugger family.