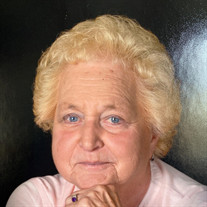 Iva Mary Harrington 83, of Statesville, passed away April 10, 2022, at her home after an extended illness. Iva was born February 16, 1939, in Vermont to the late Robert Harrington and Alice Harrington. Iva worked for the Statesville Auto Auction... View Obituary & Service Information

The family of Iva Mary Harrington created this Life Tributes page to make it easy to share your memories.

Send flowers to the Harrington family.