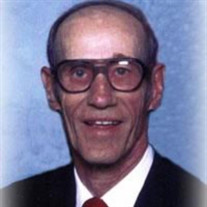 Harold Ray Sloan, 75, of 11345 Paul Payne Store Road, Stony Point, passed away Monday, September 22, 2008, after an extended illness, at his home surrounded by his loving family. He was born on December 1, 1932, in Iredell County, to the late Ivey Lee Sloan, Sr. and Pearlie Warren Sloan. Mr. Sloan served in the United States Army, retired from Southern Furniture, Catawba and was a member of Marvin United Methodist Church. In addition to his parents he was preceded in death by three brothers, Ralph Sloan, Clifford Sloan and Lester “Bill” Sloan; three sisters, Annie Allgood, Gladys Jones and Shelley Hayes. He is survived by his wife, Wahtula Dagenhart Sloan, they were married September 21, 1951, a daughter, Sharon S Bowman and husband Gerald of Taylorsville; one grandson, Hank G Childers and wife Angie; two great grandchildren, Kendrick and Kyra Childers, all of Stony Point; two step grandsons, Ricky and Jeff Bowman of Taylorsville; one step great granddaughter, Haylee Bowman; one brother, Ivey Lee “Jack” Sloan, Jr.; three sisters, Geneva Ball, Hester Stroud and Helen Lindsey all of Statesville. Special Thanks to all the staff at Iredell County Hospice for the special care we received and a special thanks to Juanita, Mary, Gary, Trina, Max, Sini Brown. We appreciate the expressions of your sympathy and love; the calls, visits, food and prayers. Please remember our family in prayer and we pray the Lord will richly bless you for your love shown to us at this time. Funeral services will be conducted Wednesday September 24, 2008, at 3:00pm at Marvin United Methodist Church. Reverend Matthew Emory and Jeff Carson will officiate. The burial will follow in the church cemetery. The family will receive friends from 2:00pm-3:00pm at the church prior to the funeral hour and other times at the home. Memorials may be given to Hospice Palliative Care of Iredell County, 2347 Simonton Road, Statesville, NC 28625 or Union Cemetery Fund, 11411 Paul Payne Store Road, Stony Point, NC. 28678

Harold Ray Sloan, 75, of 11345 Paul Payne Store Road, Stony Point, passed away Monday, September 22, 2008, after an extended illness, at his home surrounded by his loving family. He was born on December 1, 1932, in Iredell County, to the late... View Obituary & Service Information

The family of Harold Ray Sloan created this Life Tributes page to make it easy to share your memories.

Send flowers to the Sloan family.