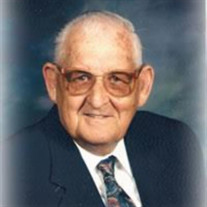 Glenn Adam Stikeleather, 81, of 7716 Paul Payne Store Road, Taylorsville passed away Thursday May 28, 2009, at Gordon’s Hospice House, Statesville after an extended illness. He was born on March 20, 1928 in Alexander County, to the late Thomas Jefferson Stikeleather and Vera Jane Rector Stikeleather. He was a truck driver for more than fifty years, retired. He was also a member of Liledoun Baptist Church and was a member of the Senior Men’s Sunday School Class. In addition to his parents, Glenn was preceded in death by one brother, Donald Eugene Stikeleather; one sister, Thelma Stikeleather; and a daughter in law, Pam Stikeleather. He is survived by his wife of fifty-eight years, Margaret Little Stikeleather of the home; one son, Lynn Stikeleather of Taylorsville; one daughter, Glenda Kerley of Taylorsville; two grandsons, John Baker and Steven Stikeleather and wife LeAnn; great grandson on the way, Dawsyn Craig Stikeleather; two sisters, Rachel Rector of Hiddenite and Colene Hoke of Taylorsville. Funeral services will be conducted at 3:00pm on Sunday May 31, 2009 at Liledoun Baptist Church. The body will lie in state thirty minutes prior to the funeral hour. Rev. James Lockee, Rev James Bumgarner and Rev Jeremy Bumgarner will be officiating. Burial will follow in the church cemetery. The family will receive friends Saturday May 30, 2009 from 7:00-8:30pm at Liledoun Baptist Church. Memorials may be made to the Gideons International, PO Box 517 Taylorsville, NC 28681.

Glenn Adam Stikeleather, 81, of 7716 Paul Payne Store Road, Taylorsville passed away Thursday May 28, 2009, at Gordon&#8217;s Hospice House, Statesville after an extended illness. He was born on March 20, 1928 in Alexander County, to the late... View Obituary & Service Information

The family of Glenn Adam Stikeleather created this Life Tributes page to make it easy to share your memories.

Send flowers to the Stikeleather family.