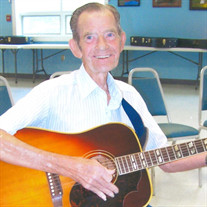 George David Swicegood Sr. , 83, of Taylorsville walked through Heaven’s gates Thursday, June 11, 2020 at the Salisbury VA after a period of declining health. He was born Monday, September 7, 1936 in Iredell County to the late Charlie Baxter Swicegood and Lelia Mae Deal Swicegood. He graduated from Cool Springs High School and joined the US Army in 1959 and was stationed in Fort Riley, KS. For his career George was a tool and dye maker. He worked for Hunt Pen and Zimmer’s. After Zimmer’s, he opened his own business, Precision Tooling, building and inventing tools and machines. He was a brilliant and talented man. After retiring, he drove a school bus for East Alexander Middle School. He was of the Baptist faith and was a member of Crestview Baptist Church in Statesville. In addition to his parents, George was preceded in death by, one daughter, Joanne Wall and one grandson, Joshua Swicegood. George is survived by, his wife of 45 years, Peggy Sue Benge Swicegood, of the home, three sons, David Swicegood Jr. & husband Richard, of Hendersonville, Heath Swicegood & wife Chastity, of Statesville, and Brian Swicegood, of Hiddenite, three daughters, Debra Shoe & husband Randy, of Mooresville, Tammy Stowe & husband Johnny, of Raleigh, and Haley Cowles & husband Brent, of Stony Point, one brother, Allen Swicegood & wife Jan, two sisters, Evelyn Swicegood and Brenda Swicegood Icenhour, all of Statesville, sixteen grandchildren, and four great grandchildren. Funeral Services will be conducted 1:00 pm Tuesday, June 16, 2020 at Crestview Baptist Church. The Rev. Joel Frye and Rev. Sterling Howard will officiate. The family will receive friends prior to the service from 12:00 – 1:00 pm at the church. Burial will follow in the church cemetery. Pallbearers will be grandchildren, Jeremy James, Jason James, Logan Swicegood, Kaleb Swicegood, Tristan Cowles, Ethan Swicegood, and Evan Swicegood. In lieu of flowers memorials may be given to The Alzheimers Association, 225 N Michigan Ave Fl 17, Chicago, IL 60601.

George David Swicegood Sr. , 83, of Taylorsville walked through Heaven&#8217;s gates Thursday, June 11, 2020 at the Salisbury VA after a period of declining health. He was born Monday, September 7, 1936 in Iredell County to the late Charlie... View Obituary & Service Information

The family of George David Swicegood Sr. created this Life Tributes page to make it easy to share your memories.

Send flowers to the Swicegood family.