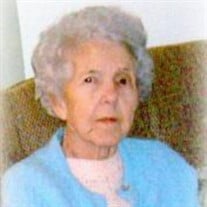 Garnette Wilson Sloan, 92, of Wilson Farm Road, Statesville, entered into eternal rest Saturday January 24, 2009 at her home. She was born August 20, 1916, in the Central Community of Iredell County to the late Robert Vance Wilson and Beulah Query Wilson. She attended Central School and was a graduate of Scotts High School. On May 16, 1945 she married Floyd M. Sloan, who preceded her in death, March 16, 1982. She was a retired hairdresser from the Beauty Nook and a lifetime member of Damascus Baptist Church. She enjoyed gardening and taking care of others. In addition to her parents and husband she was preceded in death by her brother Joe Wilson and her sister Elizabeth Sharpe. Mrs. Sloan is survived by her son, Lanny Floyd Sloan and wife Jane of Statesville; a sister, Matie Gray Wilson of the home; a brother J Floyd Wilson of Concord; two grandsons, Josh Sloan and wife Gina of Statesville, and Jake Sloan of Winston Salem.She loved her family and her grandsons were very special to her. The Sloan family would like to give a special thanks to Texie Blackburn, Dr. Moffet, Helen York, and Karen Wilson of Hospice for all the special care, love, and support extended to Garnette during the last six months. Funeral services will be conducted 11:00am Monday January 26, 2009 at Damascus Baptist Church. Rev. Dale Wallace will be officiating. Burial will follow in the church cemetery. The family will receive friends at the church following the service. Pallbearers include: Nelson Fox, Randy Dellinger, Norris Fox, Larry Price, Andy Fox and Jeremy Fox. Memorials may be given to Hospice of Iredell County, 2347 Simonton Rd. Statesville, NC 28625 or Damascus Church Cemetery Fund or Iredell County Humane Society, 2643 Fines Creek Drive, Statesville, NC 28625.

Garnette Wilson Sloan, 92, of Wilson Farm Road, Statesville, entered into eternal rest Saturday January 24, 2009 at her home. She was born August 20, 1916, in the Central Community of Iredell County to the late Robert Vance Wilson and Beulah... View Obituary & Service Information

The family of Garnette Wilson Sloan created this Life Tributes page to make it easy to share your memories.

Send flowers to the Sloan family.