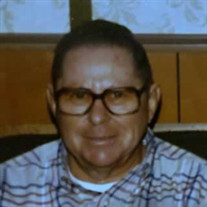 Carlton Edgar Cashion May 19, 1927 - Apr 12, 2019 Mr. Carlton Edgar Cashion, 91, of Stony Point, North Carolina, departed this life on Friday, April 12, 2019 in Taylorsville, North Carolina at Valley Nursing and Rehabilitation Center. He was born on May 19, 1927 in Alexander County, North Carolina to the late Joseph Edgar Cashion and Christine Viola Benfield Cashion. He served in the Navy during World War II as a Navy Seaman 1st Class on various ships, some of which were the U.S.S. DELONG, U.S.S. SCOTT and U.S.S. FALGOUT. He married Beulah Mae “Bea” Able on May 26, 1961 in Alexander County and was a devoted and loving husband until her passing on February 1, 2019. In addition to her passing, he was also preceded in death by a twin brother, Clayton Eugene Cashion on May 23, 1927 and brother-in-law, Jacob Dalton Lentz, Jr on November 26, 2013. He leaves to cherish the memory of his life: his sister, Janine Ethel Cashion Lentz; special cousin and caregiver, Dorothy Kerley as well as a host of nieces, nephews, cousins, friends and relatives. A graveside service will be held Tuesday April 16, at 2:00pm with military rights in the Stony Point Cemetery. The Reverend Mitchel Rash will be officiating the service.

The family of Carlton Edgar Cashion created this Life Tributes page to make it easy to share your memories.

Send flowers to the Cashion family.