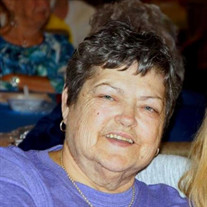 Brenda Sexton Wike, 67, of Taylorsville, passed away suddenly on Wednesday, April 29, 2020 at Catawba Valley Medical Center. Brenda was born on Monday, December 1, 1952 in Smyth County, VA. She was the daughter of the late Walter Washington... View Obituary & Service Information

The family of Brenda Sexton Wike created this Life Tributes page to make it easy to share your memories.

Send flowers to the Wike family.