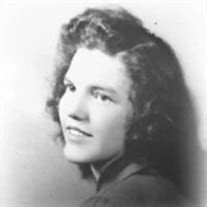 Arlene Minton Brown, age 77 of 88 Ervin Lane, Hiddenite went home to be with her heavenly Father Sunday August 29, 2010 at Frye Regional Medical Center, after an extended illness. She was born September 3, 1932 in Alexander County to the late... View Obituary & Service Information

The family of Arlene Minton Brown created this Life Tributes page to make it easy to share your memories.

Send flowers to the Brown family.